Recently I returned from a Costa Rica Dual Sport Tour. AdMo-Tours hosted a tour for a group of repeat customers from England. We hired a local outfitter, Enduro Tour Costa Rica, to provide us the best there is. We did 6 days of riding and spent another day relaxing at the beach.

Prepping a tour like this is always a bit of a challenge, especially if you are not very familiar with the environment. I have ridden in Costa Rica before and visited the country several times between 1996 and 2005, so I was fairly familiar with it. But that was a long time ago…

When we first planned the layout of the daily routes, it seemed to be a rather short tour. My concern was that the customers were used to traveling about 250 kilometers off-road per day. Christophe, the owner of Enduro Tour Costa Rica, convinced me that the 160 Kilometer mark (with occasionally slightly longer days) was just the right length to enjoy great riding, and still arrive at the next accommodation before dark. It was the right decision.

Costa Rica’s topography is extremely diverse, with everything from lofty mountains and high cloud forests to low valleys with jungle. One moment you might be at a beautiful beach with fun dirt kilometers. Just down the road, you are surrounded by farm fields with coffee plants, banana trees, papaya plantations, date palms, you name it. Roads vary from nice smooth curvy alpine-like passes to pothole-filled dirt roads and local horse trails with treacherous river crossings. 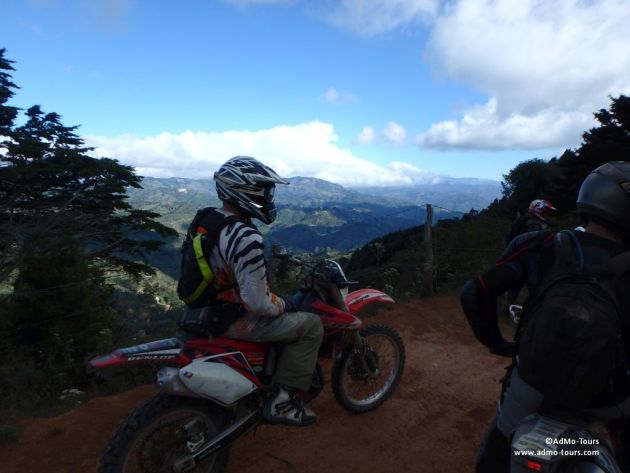 In Costa Rica almost everyone rides a motorcycle, mostly some 125 to 250cc, all well-prepped and kept shiny, often quite customized. Regularly you would see a local young man pulling into a shop on his 125cc Yamaha DT or similar model, with supermoto rims, custom paint job, and many little sparkling accessories on his bike. Costa Ricans, or Ticos as they prefer to call themselves, are proud people! They keep their property in good condition and enjoy the slice of paradise they live in with a balance of easygoing rhythms of the Pura Vida moto (pure life). The world-class infrastructure one finds along the major destinations is a result of early government decisions to invest into the farmers producing coffee and fruits for export but also resulting in redirecting its defense funds towards education, healthcare, and the environment. The selection of bikes agreed on was as interesting as everything else on this trip: 1x KTM 350, 1 x KTM 250, 1x Husqvarna 350, 1 x Husaberg 450, 1x GasGas 300, 2 x GasGas 450 and 1x Honda CRF 250, what a mixture… The bikes were still being prepped as they had just come back from a tour.

During the welcome briefing with our tour customers, there were lots of curious questions concerning the motorcycle selection. Finally about 8:30 pm we took a look at the bikes. As promised, they were newer models and in good condition. There was a team of enthusiastic fellows changing tires and making last-minute preparations. Tomorrow’s 9 am start was secured!

The next morning, after filling out the typical waivers and documenting prior damages, we were on the road, escaping the city on narrow side roads into the surrounding mountains. It is very steep terrain, fun to ride with many curvy gravel roads up and down mountain slopes covered with dairy farms and coffee plantations.

Day two took us to Volcano Turrialba, an active volcano that has been explosively eruptive in recent years including January 2017. The whole side of the mountain is covered in ashes and riding was like being on a lunar surface. 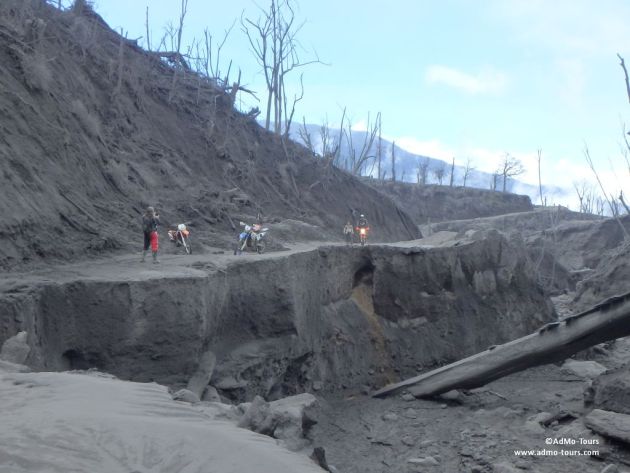 In the afternoon we entered our first section of jungle and it started to rain lightly which was just enough to make the red clay on the rocky steep trails slippery like lubricating soap. Great fun, everyone is enjoying it, that’s what we came for… Fixing a flat caused by a nail brings us a bit of a delay so we got to the hotel just in time for dinner.

The Hotel Alta Vista is sitting at almost 2000 meter above sea level, overlooking the 4 million people in and around San Jose. Costa Rica’s pristine valleys are surrounded by mountain peaks as high as 3000 meters above sea level. It is one of the world’s premiere coffee growing regions due to its volcanic soil and ideal drainage. We are right in the heard of Tarrazú, the origination of Tarrazú Geisha coffee, which became the most expensive coffee sold by Starbucks. Tarrazú’s land is owned by many small producers.

The mountains are crisscrossed with dirt roads, unbelievably steep zig-zags up and down the slopes, connecting all those farms. What a great place to ride a dirt bike. It makes you almost dizzy curving slowly but steadily down into the jungle areas and out to the beaches. It is a Sunday and lunch at the beach is as spectacular as the riding itself. It is warm and locals are relaxing in the shade of the coconut palm trees. We eat delicious fresh ocean fish, a superb change from rice and beans with chicken and beef that is typically served in Costa Rica. Just a few kilometers off the beaten path and we are in midst of a date palm plantation, waiting to get the group together.

This group has such a great dynamic. Together with guide and sweep rider, we are 10 bikes and we have not missed one of the many intersections of trails we are cruising through. The system is “rotation”. The rider second behind the guide comes up to an intersection, He waits till all riders have passed and until I give him a clear thumbs-up. He then goes into last position just before the sweep rider and so it goes, guaranteeing that everyone gets to ride all positions. 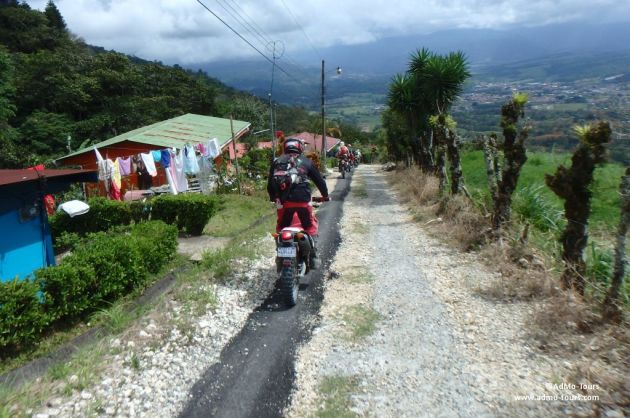 Now we are standing under some palm trees and enjoying the endless sound of the jungle, a group of small monkeys jumping the treetops just next to us, and an endless variety of birds are all over the lush vegetation. The official list of the birds of Costa Rica contains 918 species… many times near the coast we even see colorful Parrots flying through. Another one of this trip’s highlights is a bunch of giant crocodiles relaxing under a highway bridge. Somebody got some chicken meat and is feeding the crocs from the bridge… Wow, those animals look dangerous!

Another activity the group enjoyed was zip-lining through the jungle canopy. It was pricey (everything has its price in Costa Rica) but the quality was superb. After a short safety instruction and putting on safety gear, we were transported up the mountain by a tram-like wagon pulled by a tractor. Ten sections of zip-line were waiting for us, some up to 700 meters long, high up in the trees through the 80 acres of protected forest land. Spectacular views of Herradura Bay and the Nicoya Gulf were just a little bonus added to the fun action we enjoyed off the motorcycles.

It is almost impossible to believe that this tour gets better and better each day.

Riding back from the beaches through the mountains towards San Jose was filled with technical section crossing rivers, riding single trails along mountain ridges, and many fun up or downhill sections.

Our guide Christophe came to Costa Rica about 20 years ago from France. He loves the Enduro scene and he knows the trails. He showed us many trails and some were even used during the national Enduro Championship. His detailed planning and constantly adjusting to the group’s riding ability made this trip a fun-filled special adventure.

We had almost no mechanical issues and only one flat tire on the trail. Only the last day’s ride was compromised from a failing carburetor needle clip on the Honda CRF250. We quickly assessed that we could ride the bike with the choke applied so the idle was as high as possible without opening the throttle. The bike’s engine would immediately die if you opened the throttle. I volunteered to baby that bike back to San Jose. It needed a bit of pedaling and a bit of pushing by other riders through some sections but we got it home.

To top off the tour, our Guide invited us for lunch as part of the farewell. He has his own restaurant and is famous in Costa Rica for his French pastries. After riding 860 kilometers across this wild and beautiful country, we are sitting all sweaty and dirty on this lovely patio area with painted murals on the walls reminiscent of French scenery, enjoying the French flavor of the delicious food they serve us.

It’s such a good feeling…..we finished another great adventure with hardly any mishaps. Everyone boards the flight home with a big smile (and perhaps some minor bruises), and many unforgettable memories of riding through Costa Rica.

All the best, Uwe Diemer 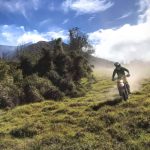 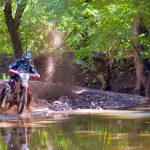 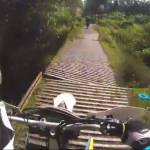 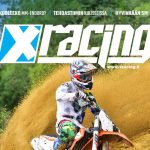 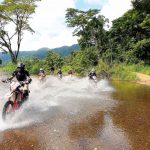 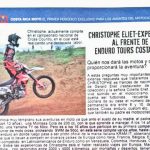 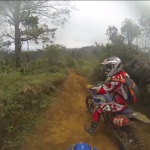